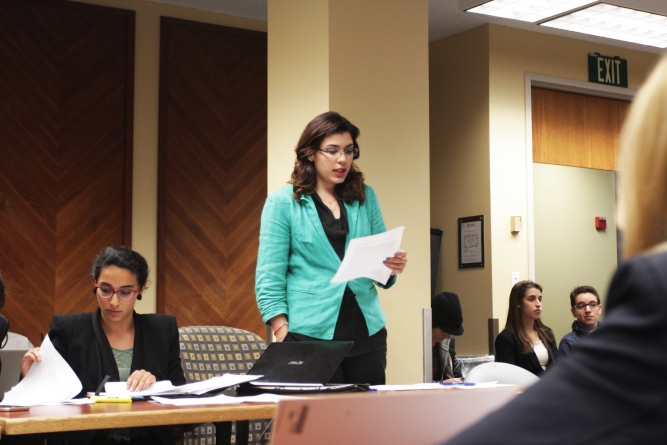 The ASUCD Court has found the ASUCD senate’s endorsement of divestment unconstitutional, according a majority opinion released Feb. 23.

Senate Resolution #9 (SR9), which urged the University of California (UC) Regents to divest from corporations affiliated with Israel, was repealed on the basis of a new court standard requiring “politicised resolutions” to “explicitly state and prove [their] impact to student welfare…” Relative to this standard, the court determined that SR9 was not sufficiently “student focused”.

Article IV of the ASUCD Student Bill of Rights allows senate to pass legislation to “express the opinions of the ASUCD on matters concerning student welfare…” Legislation of this type can only pass by a majority vote.

Marcelle Obeid, co-author of SR9 and President of the campus chapter of Students for Justice in Palestine, said that divestment supporters have not been discouraged by the majority opinion.

“It’s a minor hit to us because, symbolically, the school still did vote to divest from these corporations,” Obeid said. “So we still see it as a big win.”

The majority opinion indicated that the court would not “rescind any official action” taken between the passage of SR9 and the Feb. 18 court hearing in which the court deemed the resolution unconstitutional. As such, the submission of SR9 to the University of California Student Association (UCSA) will not be affected.

However, Obeid indicated that a coalition of divestment supporters would file an appeal. That appeal is currently being assembled by UC Davis School of Law student Mai Sartawi.

The coalition will also be proposing an amendment to the ASUCD Constitution in an attempt to protect the First Amendment rights of the members of all social movements.

“It would be very easy for opponents of [future movements] to do something similar to what they have done to us, which is find a bylaw and rule [their resolution] unconstitutional,” said Obeid. “When you, in turn, deny our vote… you are actually silencing student voices.”

The court stated in its majority opinion that senate may pass another resolution recommending divestment so long as the new resolution demonstrates that divestment will impact student welfare.

Some ASUCD officials voiced concerns regarding the ultimate institutional impact of “politicised resolutions” on the Association.

Vice President Maxwell Kappes questioned the value of such resolutions on the basis that they repel some students from ASUCD.

“I think they’re a net negative on the Association, because I’ve met many people who feel alienated from it because of this,” Kappes said. “I almost didn’t run for vice president because of this–because I just didn’t want to deal with divestment.”

“I just don’t want more legislation [like SR9] to come through ASUCD,” Helland said. “It just leads to a hot mess of people hurting each others’ feelings and it’s not conducive to a safe campus climate.”

Obeid disclosed that divestment supporters will additionally propose an ASUCD vote of no confidence in the UC Regents.

Although ultimately inconsequential to the ruling at hand, the court also set several other precedents in its majority opinion of Mitchell v. ASUCD Senate.

Secondly, the court concluded that issues need not “affect and be agreed upon” by every student to be considered a matter of student welfare, explaining that requiring a resolution to “affect every single individual student is an unreasonable standard…” Further, the court decided that, “in certain situations, matters of personal welfare can become issues of student welfare.”

Thirdly, the court declared that protections promised by the ASUCD Bill of Rights extend to off-campus incidents.

The final precedent addressed the court’s concern about the fact that senate resolutions ignoring minority viewpoints have nonetheless beared the “ASUCD” name.

The court mandated that senate label “politicised resolutions” as representing the perspective of senate, and not that of the Association as a whole. As stated in the majority opinion, “[t]his implies that while a majority of the elected representatives may agree with the resolution, individual students or student groups may still disagree.”

This mandate will hold until senate resolves inconsistencies between ASUCD’s Constitution and Bylaws.

A detailed account of the court’s reasoning can be found in the majority opinion of Mitchell v. ASUCD Senate, which is available online at http://asucd.ucdavis.edu/court-verdicts/.