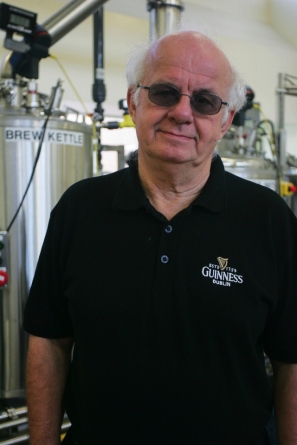 This year’s winner of the TASTE award for Best Mini-Film or Documentary is “The Art and Science of Beer” starring UC Davis’ own, Professor Charles Bamforth.

Bamforth said the award winning film was one of two short documentaries on beer brewing at UC Davis, both commissioned by the University of California Office of the President.

“The Office of the President was commissioning some films to illustrate what goes on in the University of California as a whole. They selected two topics from Davis and we were one of them,” Bamforth said.

He also said that he was not able to attend the awards ceremony in Hollywood because he was busy teaching, which he mentioned was his favorite aspect of his career.

“It never gets old, there’s always a new angle on it,” Bamforth said. “There’s always the joy of seeing the smile on people’s faces as they get it, and the realization that some of these people are going to go on and be successful brewers.”

Bamforth is a professor of malting and brewing sciences at UC Davis. He said he has been dubbed by his students “the pope of foam,” a name by which he is addressed in the documentary. He pointed to his research focus on beer foam as the inspiration for his nickname.

“I’ve been working on bubbles for a long time and we’ve probably done more research on the head on beer than anybody else,” Bamforth said.

Foam is one aspect that Bamforth said emphasizes beer as an art on top of being a science.

“We’ve done a lot of work to confirm absolutely that people drink with their eyes,” Bamforth said. “Most beer drinkers, most civilized beer drinkers, will put their beer in a glass, and if the beer’s got a foam on it they say it looks good. And if the beer’s not got a foam on it they say ‘what the hell is wrong with the beer?’”

But the art of beer does not begin and end with foam. Bamforth speaks of an entire culture surrounding beer, and points out that everything from the appearance to the actual drinking contributes to its consideration as an art.

“It’s an art form as far as it speaks to a quality of life. It’s not just the science of making the beer, it’s the imagery of that beer, it’s the presentation of the beer [and] it’s the circumstances of which you drink it,” Bamforth said.

Nor is the art simply part of the finished product. Ted Kizor graduated from UC Davis in spring 2013 with a degree in viticulture and enology, and he is a former student of Bamforth, completing both lower and upper division brewing classes under the professor. He noted that the art starts in the very beginning of the brewing process.

“Writing beer recipes is an endless art. Whether you’re playing with adjuncts, or differing the ratios of various hops or even deciding which water chemistry is going to help you make the best beer — it is an art,” Kizor said.

Kizor went on to say that the features of beer that can be considered art rely heavily on the science behind brewing.

“Most people don’t drink a beer at a bar and wonder if it has an invisible haze or what the oxidation level was at bottling, but you do notice how it smells, looks, tastes and feels,” Kizor said. “How are you going to measure those changes? How are you going to be sure that you have a consistent product? What are your standards of quality? That’s where the science comes in.”

Even speaking of beer as an art form, Bamforth does not want people to underestimate the contributions of beer to the scientific community.

“I know full well over the years what brewing has done for society, in terms of science,” Bamforth said. “A lot of the fundamental work that is applied in day to day life came out of the brewing industry.”

The documentary comments on both the art and science, which Bamforth said come together in complicated ways to form a finished product.

“It was basically me talking about the process from the mill to the finished product, and hopefully convincing people just how complex this production is, this production of beer,” Bamforth said. “A lot of people seem to think that brewing is somehow simple and straightforward, but it isn’t. It’s a whole bunch of different sciences that come together, and anyone that’s taken the upper division brewing classes pretty much knows that brewing ain’t simple.”

Jason Porter is a graduate student in food science at UC Davis and can be seen brewing in the background of the documentary. He said that brewing is a mix of all subjects from biology and engineering to history and law. He mentioned Bamforth as an inspiration for joining the business of brewing and that he’s glad to be working with beer.

Bamforth said that he is glad to have been a part of the documentary and emphasized his goal of exposing people to the message of beer, and its usefulness in teaching.

“I’m pleased that it actually does allow us to point out to people that this is a serious topic but it is [also] a fun thing and a great way to learn science,” Bamforth said.